I'd rather call it liquid sunshine

This morning I woke up to all the hostel girls coming in my room to make sure I was feeling better. I instantly knew that today was going to be a much better day. I peeked out of the window and saw that it was raining cats and dogs outside but it didn't matter because I was ready to get out of my room. The fever has gone away so I am functioning at a much more normal pace than I was yesterday. In preparing for the day, I noticed that I didn't hear the sound of the school children playing before the morning assembly. When I left my room to check, there was no children running, or giggling as they saw me in my nightie and my hair standing on top of my head. I was then told that the students and the teachers are taking a break so that the teachers could grade the half yearly exams by the 16th and I'm sure the weather played some factor. A small group of students did come, when I walked into the classroom I saw a group of smiling children; some of them I hadn't seen since the half yearly exams begun. They were all dressed in their normal clothes, rolled up jeans and frizzy hair from the rain, everyone was just laid back. I was greeted with an abnormally loud "good morning Maam" (the Maam I absolutely detest) as I coughed and croaked good morning back I thought "Yes, they are as excited to see me as I am to see them." In class, I sat as Uttam explained to them that they will have summer vacation until July 8th so that the teachers could finish grading the written exams in order to meet an important deadline....Of course, my poor little heart was shattered. That meant another week that I will not be able to teach the children. I tried not to think about it as I sat through the class. Uttam then shared with me that he wants to organize a cultural festival where the children get to perform their different traditional tribal dances and songs etc. at the school on the last day of their summer vacation. I am very excited to see what the children are going to perform, who knows, I may even join them in a Bihu dance or two. Class was more like fun today, we played sudoku, and learned Indian geography. Sankar, one of the hostel boys really impressed me with his knowledge of the Indian states. He was the only one in the entire group that knew all of the states by location, he will definitely be getting an award from me.
Because this was a semi free day for the children, the class ended at about 1 and I had no idea what I was going to do with the rest of my day. The voltage in the current was very low and I found out when using my computer that it causes electrocution so I quickly put my computer away...I have had my share of electric shocks since I have been here. The hostel children were all grinning as if they had something desperately to ask me but just couldn't muster up the strength to do so. Lipi, Uttam's sister in law, broke the ice and told me that Monika, one of the hostel girls, wanted a hair cut. I couple of weeks back I cut my hair because it was too hot and once they saw that I could cut hair and I explained to them that I had been working in a hair salon since I was 14, they wanted me to cut their hair as well. One by one the hostel girls lined up at my door to receive haircuts. I was cutting off this beautiful long hair that people in America pay to to have. The girls were all so ecstatic, and so was I. Its been so long since I've had "clientele" and to see the girls smile and swing their hair as they walked away just made it pure fun. 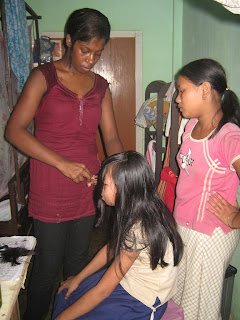 The day ended with a bee sting, Bihu and Karbi dances from the younger hostel girls and boys, as well as an awesome comedy performance from the hostel boys. (I had to throw the bee sting in there, I HATE bees.) Oh yeah as well as with fried fish, fried potatoes, greens, and rice...a good ol' home style dinner with an Indian twist. I sat to think about what I would do since I wouldn't be teaching and I realized, that their is so much here for me to do. Even in just giving the hostel children haircuts, I granted them with something that they don't receive often. I understood prior to coming that things would not always go as planned, so just because I am not teaching doesn't mean my purpose here is null. Smiles and thank yous from the students and Uttam have let me know that the small contributions that I have given make a difference here at the academy and that makes me smile and say thank you as well for allowing me to come and take part in their lives. My mother would always thank God for liquid sunshine whenever it is raining, and today I thought of her as I thanked Him for it too. Even on a dull rainy day, I had an amazing time with the children, I am feeling much better, and I had the time to think of alternative things to do with the children. The rain seems dreary on the outside but the blessings throughout the day makes it nothing more than wet sunshine!!!!