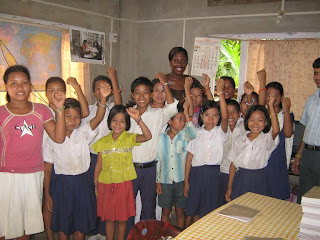 This morning I woke up not to the sound of children screaming as they played tagged on the school grounds, but to the sound of my mothers heels clicking as she prepared for work. Today I woke up in America....it all felt so different. My big sister (Lipi) wasn't knocking on my door to bring me tea, so it was only right for me to go downstairs and prepare tea for my brothers and myself. It was the first time that they had had raw tea and I prepared just as Lipi would for me along with some chana chur (one of my favorite Indian snacks)...they loved it.
My last days at the Academy were some of the hardest. I did not want to deal with the reality of leaving. I had a surprise for the hostel children and the family that took me in as their own. I made and presented them all with friendship bracelets, because they were like family, friends, and students all in one. They made my time there comforting and enjoyable. My last night there, there was no current so I sat in a circle with the children and we all shared songs, they laughed and asked me again and again to sing at least 2 American songs and I felt so shy around them, but it all was a good time. It is unexplainable how much I will miss them.

On the last day, Lipi and Monika came in the room and sat with me as my face grew longer and longer when the time got closer for me to leave. They helped me pack and made sure I didn't forget anything. Uttam's father asked me to come back and I will never forget the smile that grew on his face when I told him that I would. Uttam brought me all of my favorite sweets to eat before I left and I just felt so sad. As the children helped me bring my bags to the car, I knew it was goodbye...I couldn't look them in the eyes because the very sight of their smiling faces made me cry. Then I looked over at my big sister and saw her eyes tearing up, I couldnt hold it in any longer. I cried as I waved goodbye over and over and closed the door. I cried all the way to the airport (thank God Uttam didnt have a camera :). When I got to the airport, it was worse, I was saying goodbye to Uttam, the overprotective, caring, determined big brother that I never had. I had to say goodbye to Guwahati for now. It was really hard to accept that I was leaving my family back at the Academy, on the plane as I looked through the pictures I began to cry again, the guy next to me asked if I was missing my boyfriend. I told him I am missing my brothers and sisters and he responded with "How many do you have?" "20," I said so smoothly...he gave me a look like what are your parents up to???? But then I told him, 3 at home in America that I've missed for the past 2 months and 17 that I am leaving behind in Guwahati.
I had major flight problems, each of the flights that I had were either cancelled or delayed. The flight from Guwahati to Bangalore had to stay in Kolkata for 3 hours because the city declared a bandh and passengers could not make it to the airport, I had to spend a night in Bangalore because the plane heading to london had defective parts and could not take off, and I could not get a flight into Baltimore unless I wanted to stay in London an extra day (which would have been nice but I really just wanted to be home), so I had to fly into Dulles airport. I began traveling at 2pm on Friday (india time) and did not reach home until about 10pm Sunday night (Baltimore time...which is 8am Indian time). I was extremely tired of traveling, but I could not control my smile as I saw my mother get out of her truck to hug me. I was so happy to see her, and even though when I am away at school it's normally about 2 months between my visits home, this time felt different...I felt new and refreshed. I was so happy to see my family, to be home with them...it felt different but great none the less.
Today I am spending the day with my little brothers, amazingly we havent argued since I have been home. It was soo good to talk to them until 1 in the mornign about some of my experiences in India. I told them, this is only the beginning for me...we will many more conversations like this.
I have a couple more posts!!! Will post soon!!
Posted by DJ at 9:08 PM